Requiem for the American Dream

The 10 Principles of Concentration of Wealth & Power 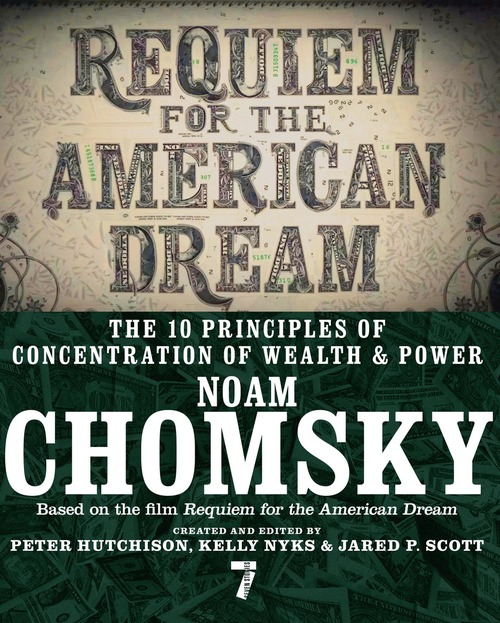 "During the Great Depression, which I'm old enough to remember, it was bad—much worse subjectively than today. But there was a sense that we'll get out of this somehow, an expectation that things were going to get better . . ." —from Requiem for the American Dream

In his first major book on the subject of income inequality, Noam Chomsky skewers the fundamental tenets of neoliberalism and casts a clear, cold, patient eye on the economic facts of life. What are the ten principles of concentration of wealth and power at work in America today? They're simple enough: reduce democracy, shape ideology, redesign the economy, shift the burden onto the poor and middle classes, attack the solidarity of the people, let special interests run the regulators, engineer election results, use fear and the power of the state to keep the rabble in line, manufacture consent, marginalize the population. In Requiem for the American Dream, Chomsky devotes a chapter to each of these ten principles, and adds readings from some of the core texts that have influenced his thinking to bolster his argument.

To create Requiem for the American Dream, Chomsky and his editors, the filmmakers Peter Hutchison, Kelly Nyks, and Jared P. Scott, spent countless hours together over the course of five years, from 2011 to 2016. Chomsky considers these to be his final, long-form interviews. After the release of the film version, Chomsky and the editors returned to the many hours of tape and transcript and created a document that included three times as much text as was used in the film. The book that has resulted is nonetheless arguably the most succint and tightly woven of Chomsky's long career, a beautiful vessel in which to carry Chomsky's bold and uncompromising vision, his perspective on the economic reality and its impact on our political and moral well-being as a nation.

The Best of Noam Chomsky

“Noam Chomsky in Requiem for the American Dream directs the fierce light of his intellect on the utopia ideology of neoliberalism, the absurd idea that markets should dictate all aspects of human society. He dissects the disastrous consequences of this ideology for our society, culture and politics. He explains how corporations indoctrinated the public, academia and the mass media to sign on for a project that has devastated the lives of working men and women and obliterated the common good. Every promise made by the proponents of neoliberalism is a lie. It is a tool to carry out the largest transfer of wealth upwards in American history while imposing wage and benefit reductions and impoverishing workers. It destroys democratic institutions. It uses trade agreements to carry out tax boycotts and run sweatshops overseas. It breeds proto-fascist movements at home and abroad. Its power to write its own laws and regulations, Chomsky points out, has ultimately created a mafia economic system and a mafia political system that is exemplified in the rise to power of the demagogue Donald Trump.”

– Chris Hedges, winner of the Pulitzer Prize and author of Wages of Rebellion: The Moral Imperative of Revolt

“Noam Chomsky’s new book, Requiem for the American Dream: The Ten Principles of Concentration of Wealth and Power, based on the film of the same name, is a primer in Chomsky’s analysis of the faults of the American political and economic system. Taking as its backbone the idea that “a significant part of the American Dream is class mobility: You’re born poor, you work hard, you get rich,” Chomsky systematically documents the many ways the system is rigged from top to bottom to ensure that corporations always win.”

Happy Birthday to our dear friend, Noam Chomsky! It’s hard to know what to say to someone as esteemed and cherished as Chomsky, so we’ll keep it simple and wish him many more years of offering a voice of sanity and conscience in an increasingly insane, unsconscionable world. All the best to you, Noam!

Born in Philadelphia in 1928, NOAM CHOMSKY is known throughout the world for his political writings, activism, and for for his groundbreaking work in linguistics. A professor at Massachusetts Institute of Technology since 1955, Chomsky gained recognition in academic circles for his theory of transformational grammar, which drew attention to the syntactic universality of all human languages. But it is as a critic of unending war, corporate control, and neoliberalism that Chomsky has become one of the country’s most well known public intellectuals. The 1969 publication of American Power and the New Mandarins marked the beginning of Chomsky’s rigorous public criticism of American hegemony and its lieges. Since then, with his tireless scholarship and an unflagging sense of moral responsibility, he has become one of the most influential writers in the world. Chomsky is the author of Manufacturing Consent: The Political Economy of the Mass Media (with Edward S. Herman), Profit Over People: Neoliberalism and Global Order, and over one hundred other books. To this day Noam Chomsky remains an active and uncompromising voice of dissent.

Other books by Noam Chomsky

Requiem for the American Dream: Free Introduction + Chapter 1 eBook: The 10 Principles of Concentration of Wealth & Power

by Noam Chomsky and Laray Polk

by Noam Chomsky and Fred Wilcox

Government in the Future

The Umbrella of U.S. Power: The Universal Declaration of Human Rights and the Contradictions of U.S. Policy

Censored 2001: 25 Years of Censored News and the Top Censored Stories of the Year

by Noam Chomsky and Ramsey Clark

by Noam Chomsky and Robert McChesney